Can we be a Guiding Light?

Thank you for being a fantastic friend to us

It was formed without any planning, without any desire and without any knowledge about how to run an orphanage. Praise The Lord it has been 17 years now and getting better by days

It was started in 1999 when Budi ( Singapore Airlines Pilot) , Peggy and the three children were having a special evening to remember about the 9 beautiful years living in Seoul, South Korea , when Budi was working and flying for Korean Airlines . The beautiful memories was celebrated by having the special dinner and on top of that the whole family was planning to plan the family trip together , to travel around the world , first class on Singapore Airlines.
During that special dinner the family was forgotten to turned off the TV which usually will be turned off .
On one of the TV program was shown the life of the East Timor refugees living miserably and full of uncertainties , while Budi and his family was having a special dinner all the plans on traveling around the world , first class all the way
This contrast condition shown on TV made Budi and Peggy concerned about the innocent children who are living at the refugee camps.
After dinner Budi and Peggy were discussing about what they saw on TV and evaluating all the possibilities.
At 23:00 pm and after asking God for guidance, Budi and Peggy decided to postpone their family holiday and changed it with a trip to visit and help those people who were shown on television living at the refugee camps.
That was how Budi, Peggy and the 3 children( Christine , Tassya and Christian) went to Timor Island for the first time as a family. At that time Christian ,the youngest child was not even 4 years old.
For the trip the family have decided to bring a load of love gift not more than 500 kg , items especially for the innocent children living as refugees. Budi and family are planning to spend some extra of USD 10 000 for the trip beside the items being collected already. After deciding what the family will be doing, Budi wrote an email to all friends both in Singapore and abroad.
While waiting for the trip friends from different walks of life were participating on our efforts to help the East Timor refugees. The day we were leaving we had 987 kg of items ( goods) collected and stored at our home in Singapore ( typical Singapore apartment is around 3300 Sq feet) . The house is full with love gifts collected among friends who wanted to participate, Praise The Lord.
From the original plan of 500 kg the amount is already double and the planned on spending USD 10 000 has been increased by SGD 55 000 ( from friends). These wonderful conditions is surely God’s helps through friends.
With the help of Mr Alex Chee Teng Hiang arranging , Singapore airlines was allowing us to carry the items to Jakarta ( for the humanitarian reasons). Thank you to Singapore Airlines.
Budi and family were stopping in Jakarta before going to the refugee camps in West Timor area. While in Jakarta Budi and Peggy went for more shopping of goods for the refugees and after 3 days of ” wild ” shopping , Budi and Peggy added some 8 tonnes more which made all items become slightly more than 9 tonnes. An amount of cargo which is not a small anymore.
Another problem of bringing the goods for the refugees from Jakarta to Kupang, West Timor. The main carrier available at that time was only Garuda Indonesia Airlines and the rest were small airlines, during that time it was so difficult to send out goods to the eastern part of Indonesia. With the help that God sent to us , Mr Harry Helliard of Pelni was able to help us on bringing the goods for free , all the way to Kupang city ,West Timor. Thank you to Mr Harry Helliard and Pelni.
The trip to Kupang was with ” Dobonsolo ” ship which were from Jakarta to Surabaya was 22 hours , Surabaya to Denpasar 17 hours and Surabaya to Kupang was 28,5 hours.
In Kupang Budi and Peggy went for another huge shopping and at the end of the preparation , more than 40 tonnes of goods were prepared and packed for the refugees. Praise The Lord for the multiplications and safe trip till Kupang.
As the preparations were completed the trip to the East Timor refugee camps was started after midnight .  The trip was planned to be around 6 hours but in reality was slightly more than 9 hours . It was such a long and winding road and many parts of the road were unpaved.
There were lots of happening a long the road and reaching the refugee camps was not that easy . We know nothing about where to go towards the camps but with the help of few pastors from a Catholic church that we found , we were escorted to the refugee camps.  Praise The Lord for the helping hands and directions.
We were distributing the goods to the refugees directly from 14:00 pm till 20:00 pm without any meals and rest.
It was great to see so many refugees being able to smile for a while as they were getting some items which really wanted to be given to them ( most of the day today items needed by a person) .
Praise The Lord for the chance to give to others and to so many helping hands on doing it

THESE ARE SOME BAGS  OF THE 987 KG OF GOODS THAT WE BROUGHT FOR THE EAST TIMOR REFUGEES IN 1999. 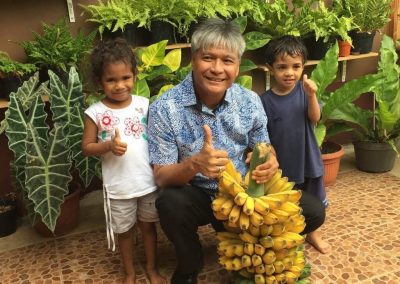 ALL ARE STARTED FROM SMALL

Volunteer your energy, talents and resources to bring inspiration and hope to those who need it.